I have been working on an NMEA Multiplexer that can run on small boards, like the Raspberry PI Zero. The code is available on github, see the documentation in the README.md.

It allows to mix all kinds of NMEA Sources into a single (or multiple) stream(s). You can read from Serial Ports, Log file(s), TCP, WebSocket, Sensors (like BME280, HTU21DF, LSM303, etc), merge those data and rebroadcast them on Serial port, TCP, Log file, WebSocket, GPSd, etc. UDP is being worked on.

Data can also be computed and injected in the output stream, like True Wind, Current direction and speed, etc.

As a graphical desktop can be cumbersome on small boards, the Multiplexer comes with a tiny HTTP server that provides a Web UI and REST services to allow remote Admin. 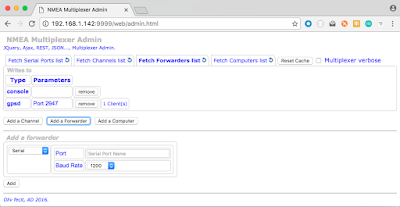 It also comes with several demos and samples 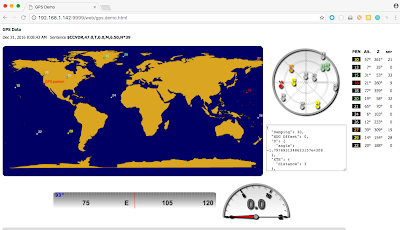 This all works just fine with OpenCPN, SeaWi, that can take TCP streams as NMEA Data Input.
I was also wondering about GPSd. I had some mixed feelings about it. Mostly, I was asking myself "Why should I parse GPSd json objects if I can parse NMEA Sentences?", and could not find any satisfying reason. The topic is mentioned on the GPSd web site's FAQ pages, but nothing clear (to me) came up from that.
Interestingly, OpenCPN can also take GPSd streams as input. But there is a trick.
The first GPSd exchange begins with a ?WATCH request. It is followed by a JSON Object like this: ... and here is the trick, OpenCPN sends a This nmea option is "poorly" documented, but very useful. Instead of sending JSON objects, GPSd spits out the raw NMEA sentences, as they were read. Then GPSd is just a regular TCP stream, and OpenCPN already knows how to parse the NMEA sentences it delivers. This way, GPSd is not limited to strictly GPS-related sentences. It can convey all NMEA sentences, Boat Speed related, Wind related, etc. This is what the GPSd forwarder that comes with the Multiplexer is doing. 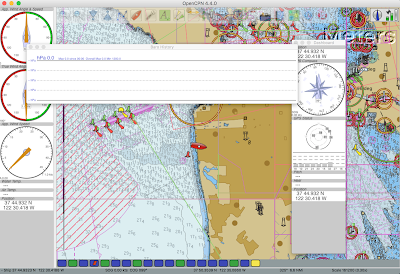 The Live Wallpaper (in the navigation console) has been improved. Several bugs were fixed (like the one for the daylight), and you can now use it offline, like when no NMEA data are coming. This can be useful when you are not on the boat (like at home). 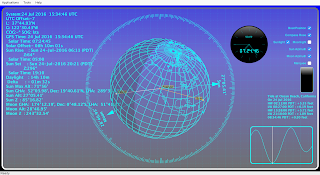 You can give a default position (in the preferences), and it will be used when no GPS Data is available.
New features: Code and (some) doc are available on GitHub.
at 8:45 AM 1 comments

Internet of things, what's the big deal?
We have a device, that can read sensors on one side, and connect to the Internet on the other, nothing revolutionary here. The challenge is to reach the device, from somewhere on the Internet, the device that reads the sensors does not necessary have a public IP address.
This is why the key component is the IoT server.
The device (the one with sensors) pushes data on the IoT server. The server can then be read from anywhere on the net.

On top of that, you can push data to the IoT device. For example, in a room:

Typically, you can have a Raspberry PI, Arduino, or similar board, reading - at home - a temperature sensor to publish the air temperature onto the IoT server. You access those data from a browser (from your office, your smart-phone, whatever). Then you may decide to turn the heater on at home, the Raspberry PI (or its friends) has a relay that drives the heater.

Many server also use some push technology (like WebSocket or similar), so a client can be notified. A server like Adafruit IO provides this service for free, Particle also does it to some extend.

In addition, Adafruit IO provides a REST interface, very slick.
See an example of a REST client - in Java - on github. It shows how to read and write data on the server.

A real IoT application is also featured here in github, along with its Adafruit IO dashboard. It reads a BME280 (for the air temperature), and provides a toggle button (switch) that drives a relay on the Raspberry PI, to turn a heater on or off.
at 8:45 AM 1 comments