The Raspberry Pi is a cool single-board computer, modular, onto which you can hook up web cam, loudspeakers, external hard drives, all kinds of devices.
It has wireless and bluetooth connectivity, several USB ports, an Ethernet port. It has everthing I expect from a computer.
It can play music and movies, with the new Raspberry Pi 4 and its 8 Gigabytes of RAM, I can even do real development work without any problem, with tools like PyCharm or IntelliJ.

The Raspberry Pi 400 has recently been released, this is a very cool configuration to think about. For 100.00 USD it comes with the board (4Gb of RAM), a keyboard and a mouse. "All" you need to add is one (or two) HDMI screen(s).
A desktop HDMI screen can be an expensive device...

Along the same lines, below are a couple of configs I came up with before the Raspberry Pi 400 was released..., keeping in mind that those configs are mobile configs, not desktop ones.

Here are several configurations for a small Raspberry Pi based laptop, to be taken on the go.

In its Pelican box, with a 7" touchscreen (no keyboard needed, it's like a tablet). The Raspberry Pi is behind the screen, ducked in the foam. 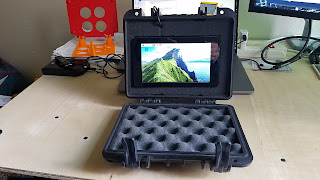 With a wood and plexiglass custom case, a breadboard, wireless keyboard with touchpad, and a 7" HDMI screen 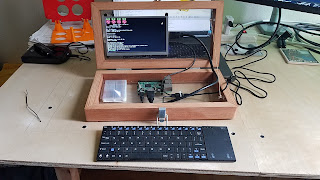 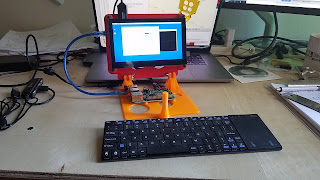 Yet another config, in a waterproof box, with webcam, 5" HDMI screen and small wireless keyboard (STL files for 3D-printing are available here).
With an Adafruit 3.5" TFT, as explained here: 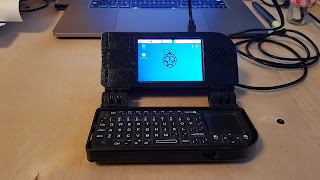 Same config, with another enclosure (all STL files available here):

And there is a Raspbian OS 64-bit version in preview... I'm looking forward to the 16Gb version of the Raspberry Pi 4!