Mac Look and Feel, on a real computer!

Definitely something to check out: Twister OS.

It runs on pretty much any Raspberry Pi 4, it comes loaded with tons of cool apps, and it possibly looks like a Mac Desktop 😀.

I'll look deeper into it, but it sounds already promising!

I was gradle'ng on the Raspberry Pi Zero as usual, and during a build, I had the following message:

What the Fr*nch??!
I spent too much time and sweat trying to find a solution.
If that happens to you, just re-install your JDK!
sudo apt-get update
sudo apt-get install openjdk-8-jdk-headless
The Raspberry Pi Zero cannot - so far - run a Java version above 8.
This operation above also re-installs the required certificates.
And you're back on track.
at 12:50 PM 0 comments

The full project is here, with the STL and OpenSCAD files for 3D printing, and the list of parts.

It plays movies, music, fully featured!! And for less than $100. Released yesterday, there is now a Raspberry Pi 4 with 8Gb of RAM, for $75 in the US!
(See the Raspberry Pi blog).
And it comes along with a beta-64 bit OS, named Raspi OS, that targets Raspberry Pis 3 and higher.

I tried it (on a Raspberry Pi 4, with 4 Gb of RAM), it works fine, and fast!
This beta version does not come with Java installed, but a simple sudo apt-get install default-jdk installs it (JDK 11) in a couple of minutes.
I cloned a repo (https://github.com/OlivierLD/raspberry-coffee.git) and built it without any problem or error.

Anyway, that makes yet another good reason NOT to get a Mac.
Steve Jobs vs Eben Upton..., I vote for Eben Upton, biiiiiig time.

Using OpenCV to downgrade an image

This is a bunch of comments on the code visible on github. The goal here is to downgrade a color image to display it on a led matrix, like a small OLED screen here, an SSD1306. We will use OpenCV, in Java. Here are the steps we follow: The level of details of the final display is obtained during the threshold part.
See in OpenCVSwingColor2BW.java: Tweaking the thresh parameter (150 above) leads to different results.
The final result is stored in a binary file (image.dat).
The matrix used here is 128x64 pixels big. The file will contain 64 lines of 2 longs.
A Java long has 64 bits, 2 longs make 128 bits, that's all we need to encode one line of 128 leds on the screen.
See the code in OpenCVSwingColor2BW.java for details. 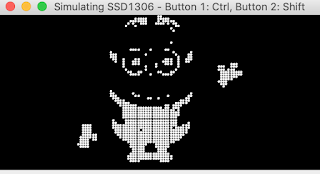 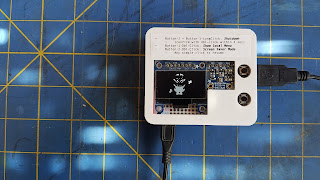 Just received the dAISy HAT from Wegmatt, it just works!
Whoever can click can do it.

And this was the opportunity to keep working on the AISParser, and I have also added a custom TCP Forwarder to the Multiplexer, along with an AIS filter on the regular TCP Forwarder.

This way, you can forward NMEA data on one port, and AIS data on another one. This is not necessary, but it can be nice to have.

Here is an example of a yaml driving the Multiplexer:

And OpenCPN is happy in both cases.